Something makes me hesitate. There’s suddenly a weird feeling in my stomach. I shrug it off, but before I can put the joint in my mouth, I find it has changed into a —

At that moment the anchor on TV announces breaking news.

“That’s right, folks,” she says in a twangy southern accent, “no need to hoard those Ho Ho’s and Ding Dongs anymore. Hostess Brands, which went bankrupt for the seventh time three years ago, has been purchased again, this time by the agricultural biotechnology corporation, Monsanto Company.”

Where did that TV come from? And how did no one ever call Hostess out for giving their products such explicitly sexual names like Ho Ho’s and Ding Dongs?

Wait a minute? Where did I get a T—

“Hey Dustin, I’m starving. Share the goods, man!” a voice calls from behind. That voice… it shouldn’t be, but it is…

“J.P.! I thought you had been written in as just an ambiguously animate stuffed animal!”

He looks at me like he doesn’t understand what I’m saying, and then takes the half-eaten Twinkie out of my hands.

“When did I…? I don’t remember eating any part of that Twinkie.”

“Relax, Dustin,” J.P. says as he takes a bite out of the Twinkie. “Calm down. You look like someone who’s been living in a cave waiting out the end of one of those really shitty apocalypses with all those businessmen in tacky ties.”

The news anchor is still talking. She says something about a possible future being averted, and that leading to the Hostess acquisition. That’s what I call thorough reporting.

“If this isn’t the apocalypse… then that means…”

“Ron Jeremy!” I exclaim. “I thought you were killed in a vampire-slaying-related incident 25 years ago!

He looks at me quizzically.

“Do you mean when I infiltrated the Fox Entertainment Group Headquarters?”

“Yeah, it turned out that Republican vampires are immune to holy water and garlic.”

J.P interrupts with a few squeaks.

“…Right, J.P., years of bible thumping before they became vampires helped them to develop a resistance to blessed water, and the acidity of garlic is quite at home in their xenophobia-soured veins. There was no way you could’ve made it out alive.”

“Are you feeling okay, Dustin?” Ron asks. “Don’t you remember? I thought I was a goner, but then, at the last minute, Chris Pratt rode in on a velociraptor and staked pamphlets with scientific evidence for global warming into their hearts and crotches.”

None of this is ringing any bells. I don’t remember Ron Jeremy surviving the attack on Fox Entertainment Group, and I don’t get all the hype surrounding Chris Pratt. Sure, he seems goofy and likable, and he’s got rock-hard abs, but Jurassic World: Fallen Kingdom was pretty much just two hours of weakly-driven setup for the next installment in what should be an extinct franchise (get it? Extinct? Because dinosaurs are extinct?). And he is single-handedly to blame for Thanos getting all of the infinity stones in Avengers: Infinity War. Side note: why didn’t Dr. Strange just create a time-loop like he did when he fought Dormammu?

Ron Jeremy clears his throat to interrupt my inner film criticism, which were, to be fair, getting a bit off topic.

“I came here because I need your help again, Dustin.”

“It seems that somehow, somewhere, a person from the future pinpointed the event that leads to the eventual world domination of sleazy, fast-talking, shitty-tie-wearing vampires.”

“Do you remember back in 2012 when Hostess went bankrupt? And when they were purchased by Gores Holdings four years later for $375 million?”

I raise my hand to ask a question, but Ron brushes it off and continues.

“It turns out that Hostess products being reintroduced was the catalyst event. Ever since we figured out that that was the starting point, every time a new conglomerate buys the rights to and begins to produce those snack cakes again, our team of rebels stops them, thereby forestalling the apocalypse.” 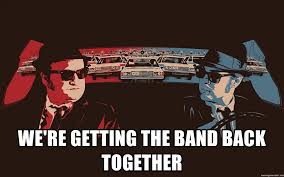 “That’s right,” he says with a grin. “We’re putting the band back together.”

Getting the old group — McFadden, Suzie, Tito, Bear, Al, Bob, and mom — back together isn’t as easy as it was for Dan Aykroyd and John Belushi. McFadden and Suzie are deep undercover in Mexico. Tito has, ironically, become a Jehovah’s witness. Bear is a competitive weightlifter in Kazakhstan. Bob and mom are the only main players still involved in the management of the business. Al had died while on assignment in Washington D.C. and we figured it best to not dig up his corpse, so I guess technically we didn’t get the whole band back together, but, whatever, close enough.

We have the reunion meeting at Denny’s because I still look close enough to Macaulay Culkin to score free meals, and also because breakfast is great any time of day. We devour two Lumberjack Slams, two All-American Slams, one Moons Over My Hammy, and three stacks of Double Berry Banana Pancakes; and then devise a plan to infiltrate the Monsanto Company headquarters.

“It has to,” replies McFadden.

A little before noon the following day, back at the company office, we pile into our nondescript white van and drive to the Monsanto headquarters. As expected, our story that we are delivering some extremely harmful chemicals to be spliced into the genes of the latest batch of GMO potatoes doesn’t even elicit a second glance from the guards as they wave us through.

Once we have the van parked, we don our custodian outfits and take the elevator up to where the head honchos are about to break for lunch from another meeting about how to exploit and/or sue local farmers.

The elevator chimes and the doors open, and we exit to the right. My god, there are pictures of vampires posing with GMO soybeans and… vampires-friendly garlic!

If they manage to propagate this on a large scale, there will be no averting the apocalypse!

After a minute we turn into the second door on the left. There are vampires of all shapes and sizes there, with ties of varying degrees of tackiness, color mismatches, and general bad taste.

The one with an off-white Toronto Blue Jays tie blurts out, “What are you doing here? Who let y—“ but before he can finish, he’s been pierced by a wooden stake in middle of his chest.

It doesn’t take the rest of the goons any time to react. Now we’ll see how much damage we can do now that we no longer have the element of surprise.

The two vampires closest to the door lunge at Bob, but he unsheathes two silver scimitars and decapitates both of them in a single motion.

Bear lifts a vampire up over his head and rips him in half at the waist. The upper half curses us as the lower half thrashes about in a series of kicks not unlike the river dance.

McFadden and Suzie are standing back to back, fighting off vampires in all directions. Some stay down, but most get back up with renewed vigor.

And, just like that, I lose awareness of everything that doesn’t immediately concern me. I don’t recall there being so many of these damned creatures in here!

That’s when I notice what must be a vampire intern — he has all the tell-tale signs: thick-rimmed glasses, a coffin-shaped pocket protector… — crouching behind a desk in the far corner. He must have hit the silent alarm! There are vampires of all administrative status running in the doors and smashing through the windows.

“Tito! Look out!” I try to warn, but it’s too late — a vampire has snuck up on him and roped him into listening to a powerpoint presentation about human capital and competitive advantages.

My mom is getting lectured on effective product testing and sample sizes by an obese she-vampire with poorly applied makeup that somehow makes her look even more undead than she must have been when she started this job.

As I tremble at the sight of our team being overpowered and wrestle with a stocky vampire wielding a 12-inch green laser pointer, that no-good snitch-of-an-intern vampire comes up from behind me and hacks off my left arm.

What the hell?! Everyone else just has to sit through presentations and listen to business jargon, but I get my arm chopped off?!

Actually, that seems preferable. Never mind, I’ll probably get used to it, or maybe even grow a new one. You can’t get the time spent in a business meeting back.

I manage to snatch the laser pointer from the first vampire and direct its beam right into his eyes. He throws his hands up to his face, steps back, and screams. Right as I turn around, I see that Ron Jeremy has made his way to the center of the room and is standing on top of the conference table. He is engaging in Plan B.

“Run!” I yell. Our team leaps out the windows, flees through the door, whatever they can do to get out of the way. Before the vampires know what’s happening, Ron detonates the liquid silver bomb.

There is a series of explosions, and the whole structure crumbles.

J.P. and I sit there in in the parking lot, covered in vampire blood, surveying the debris of the Monsanto Company headquarters. There are patches of hair missing in a few spots on J.P.’s back and limbs. I still can’t feel my left arm from where that one vampire cut it off.

“Who would’ve thought that a story could start as a guide to life after graduation and then end with me sitting here with a monkey, pondering the demise of one of the most evil companies to ever foul the earth?”

J.P. lets out a few squeaks.

“You’re right, Rule #1a was a pretty dumb rule. What was I thinking?”

The Underground Novel believes in the power of collaboration. With that in mind, this chapter was written by Oliver Brotzman, moustache enthusiast, professional grammar nazi, part time agribusiness conspiracy theorist, alleged dumpster diver, and perpetually theoretical blog writer. Don’t miss his riveting hypothetical blog about all things travel-related, coming to a webpage near you in the unspecified future!

Praise for the Novel

THE GHOSTS OF NAGASAKI is an evocative and beautifully written journey about a man’s attempt to reconcile with his ghosts.
-- Indie Reader